You are here: Home / Book and Report Series / IARC Monographs on the Identification of Carcinogenic Hazards to Humans / Red Meat and Processed Meat 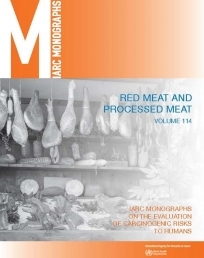 Red meat refers to unprocessed mammalian muscle meat (e.g. beef, veal, pork, lamb) including that which may be minced or frozen. Processed meat refers to meat that has been transformed through salting, curing, fermentation, smoking or other processes to enhance flavour or improve preservation. Most processed meats contain pork or beef, but may also contain other meats including poultry and offal (e.g. liver) or meat by-products such as blood.

Red meat contains proteins of high biological value, and important micronutrients such as B vitamins, iron (both free iron and haem iron), and zinc.

An IARC Monographs Working Group reviewed epidemiological evidence, animal bioassays, and mechanistic and other relevant data to reach conclusions as to the carcinogenic hazard to humans of the consumption of red meat and processed meat.

The Working Group assessed more than 800 epidemiological studies that investigated the association of cancer (more than 15 types) with consumption of red meat or processed meat, including large cohorts in many countries, from several continents, with diverse ethnicities and diets.