You are here: Home / Book and Report Series / IARC Monographs on the Identification of Carcinogenic Hazards to Humans / Some Chemicals That Cause Tumours of the Urinary Tract in Rodents 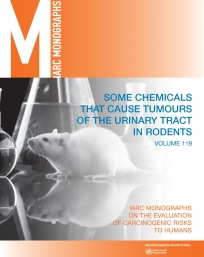 Some Chemicals That Cause Tumours of the Urinary Tract in Rodents

Exposure to all seven agents considered may occur in different occupational settings as well as in the general population.