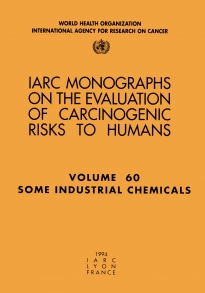 Evaluates the carcinogenic risk to humans posed by exposure to fourteen industrial chemicals, including several having considerable commercial importance as the building blocks of widely used polymers and copolymers. While some of these chemicals are evaluated for the first time, the majority have been re-evaluated in the light of substantial new data and more precise methodological guidelines for the interpretation of findings. In view of the widespread industrial use of these chemicals, particular emphasis is placed on the risk of cancer in occupationally exposed workers. Over 1,800 studies were critically assessed. The most extensive monographs cover ethylene oxide, styrene, and acrylamide. Ethylene oxide is an important raw material for making major consumer goods in virtually all industrialized countries. On the basis of evidence of small but consistent excesses of lymphatic and haematopoietic cancer found in both human and animal studies, the monograph concludes that ethylene oxide is carcinogenic to humans. For styrene, one of the most important monomers worldwide, the evaluation concentrated on evidence of a link between exposure and the risk for lymphatic and haematopoietic cancer, concluding that styrene is possibly carcinogenic to humans. Acrylamide was classified as probably carcinogenic to humans. Among the other chemicals evaluated, styrene-7,8-oxide was classified as probably carcinogenic to humans. Propylene oxide, isoprene, 4-vinylcyclohexene, and 4-vinylcyclo-hexene diepoxide were classified as possibly carcinogenic. The remaining chemicals, ethylene, propylene, vinyl toluene, N-methylol-acrylamide, methyl methacrylate, and 2-ethylhexyl acrylate, could not be classified. For two of these, methyl methacrylate and vinyl toluene, experimental evidence indicated a lack of carcinogenicity.