You are here: Home / Book and Report Series / IARC Monographs on the Identification of Carcinogenic Hazards to Humans / Some Chemicals Used as Solvents and in Polymer Manufacture 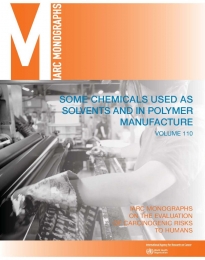 Some Chemicals Used as Solvents and in Polymer Manufacture

This volume of the IARC Monographs provides evaluations of the carcinogenicity of perfluorooctanoic acid, tetrafluoroethylene, 1,2-dichloropropane, dichloromethane, and 1,3-propane sultone.

Perfluorooctanoic acid is a fluorinated chemical that persists in the environment, having been detected in air, water, dust, and food. It is particularly important for the production of fluoropolymers such as polytetrafluoroethylene, which has a wide range of uses in industrial and consumer products, including non-stick coatings on cookware and waterproof clothing. Tetrafluoroethylene is a fluorinated monomer that is used mainly as an intermediate in the production of polytetrafluoroethylene. The chlorinated solvent 1,2-dichloropropane is used primarily as a production intermediate, but also in paint stripping and, until 2012, in printing-press cleaning in Japan. Dichloromethane is a chlorinated solvent that is used in paint stripping, aerosols, polycarbonate plastic and hydrofluorocarbon manufacture, metal and printing-press cleaning, and refrigerant production. Industrial use of the alkylating agent 1,3-propane sultone was largely discontinued in the 1960s, but it has been used recently in the manufacture of lithium batteries, and for chemical synthesis in the laboratory. Exposure to all five agents considered occurs in the general population as well as in different occupational settings.