You are here: Home / Book and Report Series / IARC Monographs on the Identification of Carcinogenic Hazards to Humans / Some Chemicals that Cause Tumours of the Kidney or Urinary Bladder in Rodents and Some Other Substances 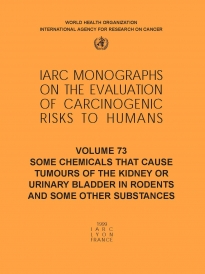 Evaluates the carcinogenic risk to humans posed by 20 individual compounds and three groups of compounds (cyclamates, saccharin and its salts, and nitrilotriacetic acid and its salts) that are known to induce tumours of the kidney or urinary bladder in rodents. As data on cancer in humans were judged inadequate for all compounds and groups of compounds, the evaluations draw on recent guidelines for determining whether the mechanisms by which a chemical exerts its carcinogenic effects in rodents are relevant to humans. Evaluations also draw on findings from studies of metabolic fate, toxic effects, reproductive and developmental effects, and genetic and related effects. Some of the compounds covered in the volume are widely used as chemical intermediates, pesticides, artificial sweeteners, and food additives. The volume also includes evaluations of the analgesic and antipyretic, paracetamol, and several naturally occurring substances in food. All but two of the compounds (meta-dichlorobenzene and methyl tert-butyl ether) were evaluated in previous IARC Monographs. Re-evaluations were made in the light of both new studies of the compounds and a growing body of evidence concerning certain pathological processes that lead to tumour development in the kidney and urinary bladder of rats exposed to some chemicals. Eight compounds were classified as possibly carcinogenic to humans: ortho-anisidine, chloroform, chlorothalonil, para-dichlorobenzene, hexachloroethane, nitrilotriacetic acid and its salts, sodium ortho-phenylphenate, and potassium bromate. The remaining substances could not be classified on the basis of available data.

Nitrilotriacetic acid and its salts

ortho-Phenylphenol and its sodium salt

Saccharin and its salts