You are here: Home / Book and Report Series / IARC Monographs on the Identification of Carcinogenic Hazards to Humans / Smokeless Tobacco and Some Tobacco-specific N-Nitrosamines 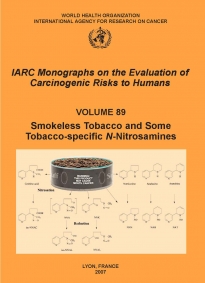 Smokeless Tobacco and Some Tobacco-specific N-Nitrosamines

This eighty-ninth volume of the IARC Monographs is the third and last of a series on tobacco-related agents. Volume 83 reported on the carcinogenicity of tobacco smoke and involuntary smoking (second-hand smoke or environmental tobacco smoke) (IARC, 2004a). Volume 85 summarized the evidence on the carcinogenic risk of chewing betel quid with and without tobacco (IARC, 2004b). That volume explored the variety of products chewed in South Asia and other parts of the word that contain areca nut in combination with other ingredients, often including tobacco. In this eighty-ninth volume, the carcinogenic risks associated with the use of smokeless tobacco, including chewing tobacco and snuff, are considered in a first monograph. The second monograph reviews some tobacco-specific nitrosamines. These agents were evaluated earlier in Volume 37 of the Monographs (IARC, 1985), and information gathered since that time has been summarized and evaluated.