You are here: Home / Book and Report Series / IARC Monographs on the Identification of Carcinogenic Hazards to Humans / Pharmaceutical Drugs 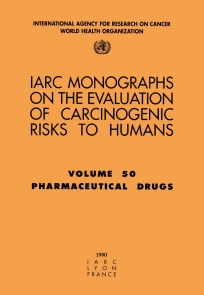 Reports the deliberations of a working group convened to evaluate the carcinogenic risk to humans posed by the therapeutic use of 15 pharmaceutical drugs. The volume features separate monographs on five antineoplastic agents, four antimicrobial agents, two diuretics, ciclosporin (an immunosuppressant), cimetidine (used in the treatment of gastric and duodenal ulcers), paracetamol (a popular analgesic and antipyretic drug), and dantron (a laxative). Drugs were selected for inclusion on the basis of published data suggesting carcinogenic effects in experimental animals or in human patients treated with the drug. The working group identified two of the drugs - ciclosporin and thiotepa - as human carcinogens. Ciclosporin, an immunosuppressant, is widely used in the prevention and treatment of graft-versus-host reactions in bone-marrow transplantation and to prevent the rejection of kidney, heart, and liver transplants. Often given to transplant recipients for several months, ciclosporin has been linked to a remarkably high occurrence of lymphomas, found predominantly in the gastrointestinal tract, as well as to skin cancer and Kaposi's sarcoma. The carcinogenicity of thiotepa, a cytostatic agent used in the treatment of malignant lymphomas and solid tumours, has been clearly demonstrated in both experimental animals and human patients, where treatment with the drug has been linked to the development of leukaemia. Azacitidine, chloramphenicol, and chlorozotocin were judged to be probably carcinogenic to humans, while dantron and trichlormethine were identified as possible human carcinogens. The remaining substances could not be classified on the basis of currently available evidence. The experts also noted that long-term experiments with paracetamol, nitrofurantoin, and nitrofural have shown reductions in tumour incidence at some sites in some animal species.


This volume can be ordered from WHO Press
Corrigenda-Vol50.pdf
Rights & Permissions
Ordering
Terms of Use