You are here: Home / Book and Report Series / IARC Monographs on the Identification of Carcinogenic Hazards to Humans / Opium Consumption 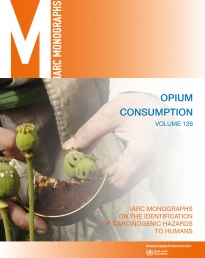 This volume of the IARC Monographs provides an evaluation of the carcinogenicity of opium consumption.

Opium is a highly addictive narcotic drug that has been used for centuries for medicinal and non-medicinal purposes. It has analgesic, hypnotic, antitussive, gastrointestinal, and cognitive effects.

Produced from the juice (latex) of the unripe seedpod of the poppy plant (Papaver somniferum), opium has a complex chemical composition consisting of at least 25 alkaloids (e.g. morphine, codeine, thebaine) and other substances. There are several forms of opium (raw or crude opium, dross, refined opium, or opium sap), all of which can be smoked or ingested. Opium derivatives such as morphine, codeine, and heroin were not considered in the present monograph.

Although opium production and distribution are controlled internationally, opium is produced illicitly in some 50 countries worldwide, with more than 80% coming from Afghanistan. The world’s largest per capita consumers of raw or minimally processed opium are the Islamic Republic of Iran, Afghanistan, and Pakistan. In 2018, there were an estimated 5 million users of illicit opium worldwide.

The supplementary web-only tables were produced in draft form by the Working Group and were subsequently fact-checked but not edited. Please report any errors to imo@iarc.fr.

Table S1.6.2A   Exposure assessment quality of studies on cancer of the oesophagus and opium consumption

Table S1.6.2B   Exposure assessment quality of studies on cancer of the urinary bladder and opium consumption

Table S1.6.2C   Exposure assessment quality of studies on cancer of the lung, larynx, and other cancers of the respiratory tract and opium consumption

Table S1.6.2D   Exposure assessment quality of studies on cancers at “other” organ sites and opium consumption