You are here: Home / Book and Report Series / IARC Monographs on the Identification of Carcinogenic Hazards to Humans / Occupational Exposures in Insecticide Application, and Some Pesticides 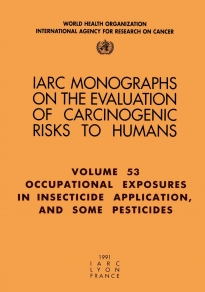 Occupational Exposures in Insecticide Application, and Some Pesticides

Evaluates the carcinogenic risk to humans posed by occupational exposure during the spraying and application of insecticides. The book also features separate monographs evaluating the carcinogenicity of 17 individual pesticides, including several that have been banned by industrialized countries yet are still used in the developing world. Although some of these pesticides have been in use for more than four decades, evaluations of carcinogenicity were hindered by the sparsity of well-designed epidemiological studies. The first and most extensive monograph evaluates data from descriptive and ecological studies, cohort studies, and case-control studies suggesting an increased risk of cancer, most notably lung cancer, multiple myeloma and other tumours of B-cell origin, in workers exposed to insecticides during their application. On the basis of this evaluation, the book concludes that the spraying and application of nonarsenical insecticides entail exposures that are probably carcinogenic to humans. The remaining monographs evaluate the carcinogenicity of aldicarb, atrazine, captafol, chlordane, DDT, deltamethrin, dichlorvos, fenvalerate, heptachlor, monuron, pentachlorophenol, permethrin, picloram, simazine, thiram, trifluralin, and zitram. Of these, captafol, a fungicide used on plants, for seed treatment, and as a wood preservative, was classified as probably carcinogenic to humans. Atrazine, chlordane, DDT, dichlorvos, heptachlor, and pentachlorophenol were classified as possibly carcinogenic to humans. The remaining pesticides could not be classified on the basis of available data.

Occupational Exposures in Spraying and Application of Insecticides