You are here: Home / Book and Report Series / IARC Monographs on the Identification of Carcinogenic Hazards to Humans / Human Immunodeficiency Viruses and Human T-Cell Lymphotropic Viruses 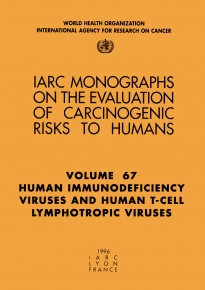 Evaluates the carcinogenic risk to humans posed by infections with human immunodeficiency viruses types 1 and 2 (HIV-1 and HIV-2) and human T-cell lymphotropic viruses types I and II (HTLV-I and HTLV-II). Although emphasis is placed on carcinogenicity assessment, the monographs also provide richly detailed descriptions of the viruses' genetic and structural features, methods of detection, routes of transmission, geographical distribution of infection, clinical manifestations of non-neoplastic disorders, and currently available methods of treatment and prevention. For HIV infection, the evaluation of studies of cancer in humans considers abundant evidence, from case reports and epidemiological studies, pointing to greatly increased incidences of Kaposi's sarcoma and non-Hodgkin's lymphoma in persons infected with HIV-1. Data suggesting an association between HIV infection and cervical, anal, and several other cancers are also carefully assessed. Other data considered include findings from animal studies and investigations of the mechanisms by which immune dysfunction may contribute to the genesis of cancer. On the basis of this evaluation, the monograph concludes that infection with HIV-1 is carcinogenic to humans. Infection with HIV-2 was classified as possibly carcinogenic to humans. The second monograph provides a similarly detailed evaluation of human T-cell lymphotropic viruses, which are the only known human oncornavirinae. Concerning studies of cancer in humans, particular attention is given to evidence of an association between HTLV-I and adult T-cell leukaemia/lymphoma, which occurs almost exclusively in areas where this infection is endemic. In addition, several case-control studies have found an association between HTLV-I seroprevalence and tumours of the vagina, cervix and liver, but confounding effects and bias could not be excluded. The evaluation also considered findings from animal carcinogenicity studies and from investigations of the molecular mechanisms of leukaemogenesis. On the basis of this evaluation, the monograph concludes that HTLV-I is carcinogenic to humans. HTLV-II could not be classified as to its carcinogenicity to humans.