You are here: Home / Book and Report Series / IARC Monographs on the Identification of Carcinogenic Hazards to Humans / Formaldehyde, 2-Butoxyethanol and 1-tert-Butoxypropan-2-ol 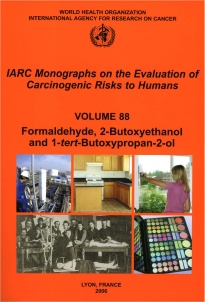 This eighty-eighth volume of IARC Monographs evaluates the available evidence on the carcinogenic potential in humans of formaldehyde, 2-butoxyethanol and 1-tert-butoxypropan-2-ol. Formaldehyde, a potential carcinogen is found in the workplace and in the environment, has been studied the most widely and has been evaluated three times previously. It is being re-evaluated this time following a recommendation from an Advisory group that identified formaldehyde as a high priority for future re-evaluation, based on the availability of complex mechanistic data and the anticipated publication of new epidemiological studies that became available soon afterwards. The same Advisory Group also identified 2-butoxyethanol and other glycol ethers as high priorities, based on the availability of new carcinogenesis bioassays conducted by the US National Toxicology Program. This is the first evaluation that IARC has made to the two glycol ethers.