You are here: Home / Book and Report Series / IARC Monographs on the Identification of Carcinogenic Hazards to Humans / Surgical Implants and Other Foreign Bodies 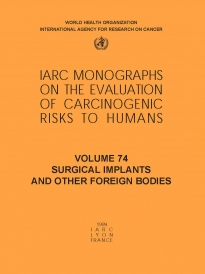 Surgical Implants and Other Foreign Bodies

Evaluates the carcinogenic risks to humans of surgical implants and other foreign bodies. Foreign bodies are defined as any exogenous object that has been introduced into the tissues or cavities of the body and is not rapidly absorbed. The evaluation focuses on exposures caused by the presence in the body of a solid metallic or non-metallic object as a result either of surgery or of involuntary penetration, as through a war wound. Medical and dental devises are grouped together as metallic, non-metallic, and mixed materials, which have different profiles of biological activity. The volume opens with a review of key concepts in the understanding of host-material interactions. Subsequent chapters evaluate human exposure data, evidence from case reports and analytical studies for carcinogenicity in humans and in companion animals, evidence of carcinogenicity of implanted materials from animal experiments, and further background material on mechanisms of degradation and carcinogenicity. On the basis of this review, three implants were classified as possibly carcinogenic to humans: polymeric implants prepared as thin smooth films, with the exception of poly(glycolic acid) implants; metallic implants prepared as thin smooth films; and implanted foreign bodies of metallic cobalt, metallic nickel and an alloy powder containing 66-67% nickel, 13-16% chromium, and 7% iron. The remaining materials and implants could not be classified on the basis of available data. The evaluation cites evidence suggesting lack of carcinogenicity in humans of breast implants, made of silicone, for female breast carcinoma.

Surgical Implants and Other Foreign Bodies