You are here: Home / Book and Report Series / IARC Monographs on the Identification of Carcinogenic Hazards to Humans / Some Naturally Occurring Substances: Food Items and Constituents, Heterocyclic Aromatic Amines and Mycotoxins 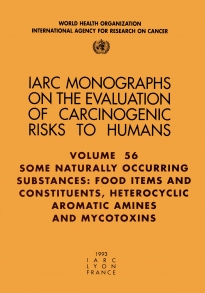 Toxins Derived from Fusarium Moniliforme: Fumonisins B1 and B2 and Fusarin C
[see also Volume 82]

This volume can be ordered from WHO Press