You are here: Home / Book and Report Series / IARC Monographs on the Identification of Carcinogenic Hazards to Humans / Some Aromatic Amines and Related Compounds 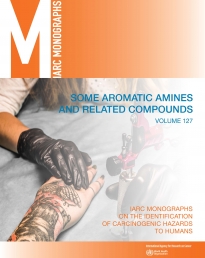 Some Aromatic Amines and Related Compounds

ortho-Anisidine, and its salt, ortho-anisidine hydrochloride, are mainly used as chemical intermediates in the synthesis of azo pigments and dyes for consumer products, textiles, paper, and cardboard.

ortho-Nitroanisole is used primarily as a precursor for the manufacture of ortho-anisidine.

Aniline, the parent compound of aniline hydrochloride, is a High Production Volume chemical used in the synthesis of isocyanates, dyes and pigments, and rubber-processing chemicals, and in the production of pharmaceuticals, herbicides, fungicides, and of many consumer goods, including textiles, leather, and colourants, including tattoo ink. Tobacco smoke is a main source of exposure to aniline in the general population.

Cupferron is a reagent used to separate metals such as copper, iron, tin, vanadium, and thorium from other metals.

For all agents, data were sparse regarding exposure levels, but indicated that exposures are higher in occupational situations than in the general population.

An IARC Monographs Working Group reviewed evidence from cancer studies in humans, cancer bioassays in experimental animals, and mechanistic studies to assess the carcinogenic hazard to humans of exposure to these agents and concluded that:

These supplementary web-only tables were produced in draft form by the Working Group and were subsequently fact-checked and edited. Please report any errors to imo@iarc.fr.

This supplementary web-only table was produced in draft form by the Working Group and was subsequently fact-checked and edited. Please report any errors to imo@iarc.fr.

Table S2.3 Individual case reports and case series on cancer and exposure to aniline
Rights & Permissions
Ordering
Terms of Use