You are here: Home / Book and Report Series / IARC Monographs on the Identification of Carcinogenic Hazards to Humans / Ionizing Radiation, Part 2: Some Internally Deposited Radionuclides 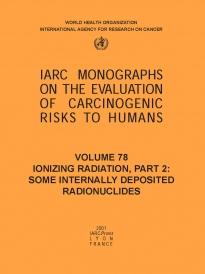 This monograph evaluates the evidence for carcinogenicity of ionizing radiation from internally deposited radionuclides. The radionuclides considered in this monograph belong to two broad categories, those that emit a-particles (helium nuclei) and those that emit b-particles (electrons) during their primary radioactive decay. For purposes of this monograph, 'internally deposited' refers to radionuclides in dispersed forms (e.g., dusts, suspensions, solutions, or gases) that enter the body through inhalation, ingestion, by some form of injection, or, in some cases, by percutaneous absorption. Radionuclides may also enter tissues within removable objects, such as radioactive beads, needles, etc. which may be implanted surgically for therapeutic purposes, or other kinds of fragments implanted accidentally. These kinds of exposures are not considered in this volume. Also not considered are radionuclides (e.g., iron-55, gallium-67) which undergo radioactive decay through processes that do not include emission of either a or b particles. Radon and its decay products were previously evaluated in IARC Monographs Volume 43 (1988) as carcinogenic to humans (Group 1). The subsequently published scientific literature on occupational and residential exposures to radon was reviewed and included in this volume as an update, but no re-evaluation of radon was considered necessary. Six specific radionuclides of the elements radium, thorium, plutonium and phosphorus, plus mixed radionuclides of iodine, were evaluated as carcinogenic to humans (Group 1) on the basis of sufficient evidence for increased risk of cancer in exposed individuals. These include radium-224, radium-226, radium-228, thorium-232 (administered in colloidal form as thorium-232 dioxide), plutonium-239 (exposure to which also entails exposure to plutonium-240 and other isotopes of plutonium), radioisotopes of iodine including iodine-131, and phosphorus-32. Evidence for increased cancer risk in exposed humans is from medical usage in the cases of radium-224, thorium-232 and phosphorus-32, and from occupational or accidental/environmental exposures for plutonium-239, radium-226 and radium-228, and the radioiodines. In addition, the global evaluations of two broad categories of internally deposited radionuclides were made on the basis of carcinogenicity in experimental animals plus other relevant data: Internally deposited radionuclides that emit a particles are carcinogenic to humans (Group 1). Internally deposited radionuclides that emit b particles are carcinogenic to humans (Group 1). Ionizing Radiation, Part 1: X-and Gamma (g) Radiation, and Neutrons, Volume 75 of the Monographs addressed the carcinogenic potential of external X-rays, g-rays and neutrons in exposed populations (see overleaf).