You are here: Home / Book and Report Series / IARC Monographs on the Identification of Carcinogenic Hazards to Humans / Some Antiviral and Antineoplastic Drugs, and Other Pharmaceutical Agents 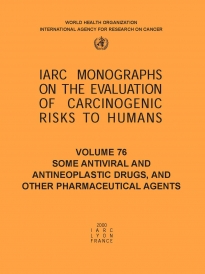 Some Antiviral and Antineoplastic Drugs, and Other Pharmaceutical Agents

Evaluates the carcinogenic risks to humans posed by the use of four antiretroviral agents, four DNA topoisomerase II inhibitors used in the treatment of cancer, and an additional three pharmaceutical agents (hydroxyures, phenolphthalein, and vitamin K substances). The volume marks the first IARC evaluation of nucleoside analogs that act as antiviral agents. The evaluation responds in part to recent findings that zidovudine (AZT), an effective antiretroviral agent now being given to pregnant HIV-infected women to prevent maternal-to-fetal transmission of the virus, is a transplacental carcinogen in mice. The opening monograph evaluates the carcinogenicity to humans of the antiretroviral nucleoside analogs zidovudine (AZT), zalcitabine (ddC), and didanosine (ddI), and the antiherpesvirus drug aciclovir. Of these, aciclovir and didanosine could not be classified on the basis of available data. For zidovudine, transplacental administration to mice resulted in an increased incidence and multiplicity of lung and liver tumours and in an increased incidence of female reproductive tract tumours in one study, but not in another involving treatment at a lower dose. Despite observation of toxic effects in some studies of humans, human carcinogenicity data were judged to provide inadequate evidence of carcinogenicity in humans. Zidovudine was classified as possibly carcinogenic to humans. Similar weaknesses in human carcinogenicity data for zalcitabine, which consistently induces thymic lymphomas in mice, resulted in its classification as possibly carcinogenic to humans. The second monograph evaluates four DNA topoisomerase II inhibitors: etoposide, teniposide, mitoxantrone, and amsacrine. Of these, etoposide - one of the most widely used and effective cytotoxic drugs in combination therapy - was classified as probably carcinogenic to humans, and etoposide in combination with cisplatin and bleomycin was judged to be carcinogenic to humans. Teniposide was classified as probably carcinogenic to humans, and mitoxantrone and amsacrine were classified as possibly carcinogenic to humans. Of the three pharmaceutical agents evaluated in the final monograph, hydroxyurea, which is widely used in cancer treatment and, increasingly, in combination with didanosine in HIV infection, could not be classified. Phenolphthalein, a widely used laxative now being withdrawn from the market in many countries because of toxicological concerns, was classified as possibly carcinogenic. Vitamin K substances could not be classified on the basis of available evidence.