You are here: Home / Book and Report Series / IARC Monographs on the Identification of Carcinogenic Hazards to Humans / Ionizing Radiation, Part 1: X- and Gamma (γ)-Radiation, and Neutrons 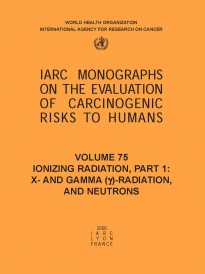 Evaluates the carcinogenic risks to humans posed by exposure to X- and g-radiation and to neutrons from external sources. The book opens with a general introduction to nomenclature, dosimetric methods and models in the occupational and environmental settings, the behaviour of radiation in biological tissues, and sources of human exposure. Natural background radiation is identified as by far the largest source of exposure for the world's population. The medical use of X-rays and radiopharmaceuticals constitutes the next most significant source, followed by exposure from atmospheric testing of nuclear weapons. The collective doses from other sources of radiation are considered much less important. The first and most monograph, on X- and g-radiation, reviews the large body of evidence arising from the extensive investigation of carcinogenic effects in humans, mainly in survivors of the atomic bombings in Japan and patients exposed to radiation for medical reasons. In both groups, an excess number of cases of leukaemia and other cancers have been observed. Irradiation during childhood increases the risk of thyroid cancer, while an increase in breast cancer risk has been observed after irradiation of pre-menopausal women. X-rays and g-rays have also been tested for carcinogenicity at various doses and under various conditions in a range of animal species. In adult animals, the incidences of leukaemia and of mammary, lung, and thyroid tumours were increased in a dose-dependent manner with both types of radiation. Prenatal exposure also gave rise to increased incidences of various types of tumours. On the basis of this evidence, the monograph concludes that X-radiation and g-radiation are carcinogenic to humans. The carcinogenic risk to humans posed by exposure to neutrons is evaluated in the second monograph, which concentrates on risks associated with the exposure of patients to neutron radiotherapy beams and exposures of aircraft passengers and crew. In high-altitude cities, neutrons can constitute as much as 25% of background radiation. Neutrons from various sources with wide ranges of mean energy have been tested for carcinogenicity in different animal species, and at various doses and dose rates. In adult animals, the incidences of leukaemia and ovarian, mammary, lung, and liver cancer were increased in a dose-related manner. Prenatal and parental exposure resulted in increased incidences of liver tumours in the offspring. In virtually all studies, neutrons were more effective in inducing tumours than were X-rays and g-rays when compared on the basis of absorbed dose. Although no adequate human carcinogenicity data were available for assessment, the monograph used other relevant data, including evidence of DNA damage, to reach the conclusion that neutrons are carcinogenic to humans.