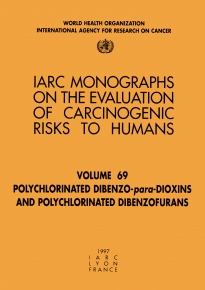 Evaluates the carcinogenic risks to humans posed by exposure to polychlorinated dibenzo-para-dioxins (PCDDs) and polychlorinated dibenzofurans (PCDFs). PCDDs are formed as inadvertent by-products, sometimes in combination with PCDFs, during the production of chlorophenols and chlorophenoxy herbicides, and have been detected as contaminants in these products. PCDDs and PCDFs may also be produced in thermal processes such as incineration and metal-processing and in the bleaching of paper pulp with free chlorine. Of the PCDDs, 2,3,7,8-tetrachlorodibenzo-para-dioxin (2,3,7,8-TCDD), or "dioxin", has attracted the greatest concern. PCDDs and PCDFs are ubiquitous in soil, sediment, and air, persist in the environment, and accumulate in animal fat. Excluding occupational and accidental exposures, most human exposure to these compounds occurs from the consumption of meat, milk, eggs, fish, and related products. Occupational exposures at higher levels have occurred since the 1940s as a result of the production and use of chlorophenols and chlorophenoxy herbicides and, for PCDFs, in metal production and recycling. Even higher exposures have occurred in sporadic industrial accidents and following incidents of rice oil contamination. The evaluation, which considered abundant human and animal carcinogenicity data, found strong evidence from epidemiological studies in humans that exposure to 2,3,7,8-TCDD produces increased risks for all cancer combined, rather than for any specific site, suggesting that 2,3,7,8-TCDD is an unprecedented multi-site carcinogen with no single site predominating. Citing data from animal studies and other lines of evidence, the monograph concludes that 2,3,7,8-TCDD is carcinogenic to humans. Other polychlorinated dibenzo-para-dioxins and dibenzo-para-dioxin could not be classified as to their carcinogenicity to humans. For PCDFs, the evaluation considered evidence from two large poisoning incidents involving rice oil contamination in Japan and Taiwan. Although excessive mortality from liver cancer was observed in long-term follow-up of the Japanese cases, the report cited other factors, including a high prevalence of chronic hepatitis B infection in the geographical area concerned, as possible explanations. Evidence of carcinogenicity to human was judged inadequate. In the absence of convincing data from experimental animals, PCDFs could not be classified as to their carcinogenicity to humans.