You are here: Home / Book and Report Series / IARC Monographs on the Identification of Carcinogenic Hazards to Humans / Some Pharmaceutical Drugs 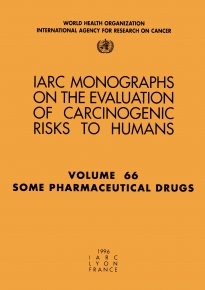 Evaluates the carcinogenic risk to humans posed by the therapeutic use of thirteen pharmaceutical drugs, including eight benzodiazepines and related compounds used for the treatment of anxiety and as sedatives and anticonvulsants, three triphenylethylene anti-oestrogenic compounds developed for the treatment of breast cancer, and two cholesterol-lowering agents used to treat patients at high risk for cardiovascular disease. Evaluations are based on a critical assessment of all data available for these compounds, including abundant information on pharmacokinetic and pharmacodynamic effects, precise studies of exposure-response relationships, and findings that shed light on mechanisms of carcinogenic action. The most extensive monograph evaluates the large body of data on tamoxifen, which has been used for almost two decades as the first-line endocrine therapy for postmenopausal women with advanced metastatic breast cancer. Tamoxifen is also used as adjuvant therapy in patients with breast cancer and is being tested for use as a preventive agent. The evaluation found sufficient evidence in humans for the carcinogenicity of tamoxifen in increasing the risk for endometrial cancer, and conclusive evidence that tamoxifen reduces the risk for contralateral breast cancer in women with a previous diagnosis of breast cancer. Evidence for the carcinogenicity of tamoxifen in other organs was judged inadequate. Of the benzodiazepines, diazepam, which is the most widely prescribed, received the most extensive evaluation. Evidence reviewed suggested lack of carcinogenicity to the breast and inadequate evidence for carcinogenicity at other sites in humans. Diazepam could not be classified as to its carcinogenic risk to humans. Of the remaining benzodiazepines and related compounds, estazolam, prazepam, ripazepam, and temazepam could not be classified as to their carcinogenicity to humans. Oxazepam was classified as possible carcinogenic to humans on the basis of its carcinogenicity to rodents and uncertainty about extrapolation of experimental data to humans. Phenytoin, which has been widely used since the 1930s as an anticonvulsant in the treatment of epilepsy, was classified as possibly carcinogenic to humans. Of the remaining triphenylethylene anti-oestrogenic drugs developed for the treatment of breast cancer, neither toremifene, which is just being introduced, nor droloxifene, which is under development, could be classified. Likewise, data were judged inadequate for the classification of the two cholesterol-lowering drugs, clofibrate and gemfibrozil.

Tamoxifen [superseded by Volume 100A]