You are here: Home / Databases / IARC CancerBases / Atlas of Visual Inspection of the Cervix with Acetic Acid for Screening, Triage, and Assessment for Treatment 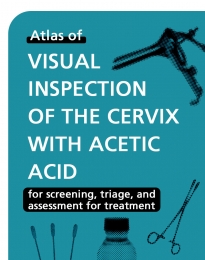 Atlas of Visual Inspection of the Cervix with Acetic Acid for Screening, Triage, and Assessment for Treatment

Cervical cancer screening followed by treatment of screen-detected precancers and cancers is a key strategy, along with vaccination against human papillomavirus (HPV), to eliminate this deadly cancer. Visual inspection after application of acetic acid (VIA) is widely used as a screening test in low- and middle-income countries, because of its simplicity, point-of-care nature, and low cost. This atlas describes the use of VIA as a primary screening test or as a triage test for HPV-positive women, and explains how application of dilute acetic acid to the cervix can help in determining eligibility for ablative treatment. This atlas is designed for providers of VIA or HPV testing, especially in a setting where the screen-positive women are immediately evaluated for treatment with either cryotherapy or thermal ablation (the screen-and-treat approach). It will be an extremely useful resource for providers of cervical cancer screening in low- and middle-income countries and will remain relevant irrespective of the screening and management algorithm used in a particular setting.