You are here: Home / Book and Report Series / IARC Monographs on the Identification of Carcinogenic Hazards to Humans / Isobutyl Nitrite, β-Picoline, and Some Acrylates 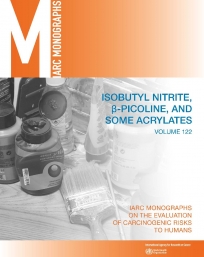 Isobutyl Nitrite, β-Picoline, and Some Acrylates

β-Picoline, a methyl pyridine, is widely used as a starting material for pesticides (e.g. chlorpyrifos) and pharmaceuticals (e.g. vitamin B3). It is also used as a flavouring substance in foods and beverages. Isobutyl nitrite is used an intermediate in the syntheses of solvents and fuels, and exposures also occur through its use as a recreational drug.

Exposure to all six agents considered may occur in the general population as well as in various occupational settings.