You are here: Home / Book and Report Series / IARC Monographs on the Identification of Carcinogenic Hazards to Humans / Some Chemicals Used in Plastics and Elastomers 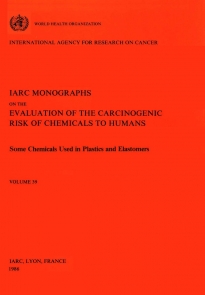 Some Chemicals Used in Plastics and Elastomers

This thirty-ninth volume of IARC Monographs comprises considerations of a number of industrial chemicals used in the production of plastics and elastomers; some of the compounds are also used in paints and adhesives. Two compounds - dichloroacetylene and 4-vinylcyclohexene - can occur as by-products in the production or use of some of these chemicals. New data were available on some of the chemicals evaluated previously: methyl acrylate, ethylacrylate, caprolactam, 4,4'-methylene-dianiline, toluene diisocyanate, vinyl acetate, vinyl bromide and vinylidene chloride, and these have been summarized and taken into consideration in the re-evaluations. 4,4'Methylenediphenyl diisocyanate, a monomer produced from 4,4'-methylenedianiline (MDA) can hydrolyse to MDA when in contact with moisture; however, 4,4'-methylenediphenyl diisocyanate was not re-evaluated in the present volume because no new data on carcinogenicity have become available. New evidence is now available of human exposure to several of the substances considered in the present volume, and more data are being generated on the environmental levels of certain of the substances in particular contexts. Studies in which reproductive toxicity in experimental animals was evaluated were available previously only for vinylidene chloride and caprolactam; in the present volume, such reports are given for acrylamide, n-butyl acrylate, ethyl acrylate, 1,3-butadiene, vinylidene chloride, caprolactam, melamine and 4,4'-methyl-enedianiline. New information is now available on the carcinogenic activity of several of the chemicals considered previously. For several of the monomers considered in this volume, there is evidence of carcinogenicity in experimental animals (1,3-butadiene, toluene diisocyanate, vinyl bromide), for others, the data are inadequate, and more testing is needed.