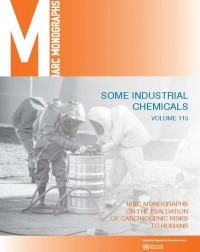 This volume of the IARC Monographs provides evaluations of the carcinogenicity of: N,N-dimethylformamide, a solvent produced in high volumes and commonly used in many industrial processes; 2-mercaptobenzothiazole, a rubber accelerant and preservative; the rocket fuel hydrazine; the widely used fire retardant tetrabromobisphenol A; 1‐bromopropane, a solvent used in dry cleaning, degreasing and adhesive resins; the seed fumigant 3‐chloro‐2‐methylpropene; and N,N-dimethyl‐p‐toluidine, a hardening agent in dental and bone adhesives.

Exposure to all seven agents considered may occur in the general population as well as in different occupational settings.