You are here: Home / Book and Report Series / IARC Monographs on the Identification of Carcinogenic Hazards to Humans / Some Nanomaterials and Some Fibres 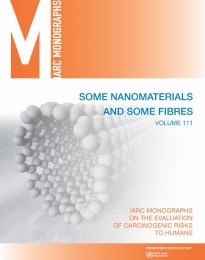 Some Nanomaterials and Some Fibres

This volume of the IARC Monographs provides an assessment of the carcinogenicity of fluoro-edenite fibrous amphibole, silicon carbide fibres and whiskers, and carbon nanotubes, including single-walled and multiwalled types. None of these agents had been assessed previously by the IARC Monographs Working Group.

The Working Group relied mainly on epidemiological studies to evaluate the carcinogenic hazard to humans exposed to fluoro-edenite fibrous amphibole, an environmental contaminant that was reported to cause mesothelioma in the regional population of Biancavilla, Sicily, Italy.

Silicon carbide fibres are by-products of the manufacture of silicon carbide particles by the Acheson process; silicon carbide whiskers are produced by other processes. The evaluations of the fibres and of the occupational exposures associated with the Acheson process were mainly based on epidemiological studies, whereas the assessment of the whiskers – in the absence of epidemiological data – was based on carcinogenicity bioassays and consideration of their physical properties.

In view of the absence of epidemiological studies on carbon nanotubes and the limited information available from mechanistic data, the evaluations of single-walled and multiwalled carbon nanotubes relied essentially on carcinogenicity bioassays.