You are here: Home / Book and Report Series / IARC Monographs on the Identification of Carcinogenic Hazards to Humans / Outdoor Air Pollution 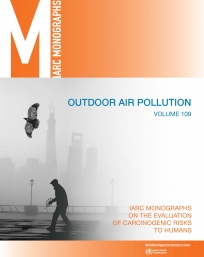 This volume of the IARC Monographs provides an evaluation of the carcinogenicity of outdoor air pollution.

Outdoor air pollution is a complex mixture of pollutants originating from natural and anthropogenic sources, including transportation, power generation, industrial activity, biomass burning, and domestic heating and cooking. The mix of pollutants in outdoor air varies widely in space and time, reflecting the diversity of sources and the influence of atmospheric processes. Commonly measured air pollutants include particulate matter (PM2.5, PM10), nitrogen dioxide, and sulfur dioxide; the concentration of particulate matter is often used as an indicator of pollution levels. Millions of people worldwide are exposed to outdoor air pollution at levels that substantially exceed existing health-based guidelines.

This evaluation is the culmination of a series that has examined individual pollutants that are contained in the mixture of outdoor air. Related previous evaluations have been published in IARC Monographs Volumes 92, 93, 95, 100C, 100E, 103, and 105.