You are here: Home / Book and Report Series / IARC Monographs on the Identification of Carcinogenic Hazards to Humans / Diesel and Gasoline Engine Exhausts and Some Nitroarenes 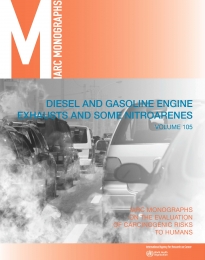 Diesel and Gasoline Engine Exhausts and Some Nitroarenes

In 1988, IARC classified diesel exhaust as probably carcinogenic to humans (Group 2A). An Advisory Group which reviews and recommends future priorities for the IARC Monographs Program had recommended diesel exhaust as a high priority for re-evaluation since 1998. There has been mounting concern about the cancer-causing potential of diesel exhaust, particularly based on findings in epidemiological studies of workers exposed in various settings. This was re-emphasized by the publication in March 2012 of the results of a large US National Cancer Institute/National Institute for Occupational Safety and Health study of occupational exposure to such emissions in underground miners, which showed an increased risk of death from lung cancer in exposed workers. The scientific evidence was reviewed thoroughly by the Working Group and overall it was concluded that there was sufficient evidence in humans for the carcinogenicity of diesel exhaust. The Working Group found that diesel exhaust is a cause of lung cancer (sufficient evidence) and also noted a positive association (limited evidence) with an increased risk of bladder cancer (Group 1). The Working Group concluded that gasoline exhaust was possibly carcinogenic to humans (Group 2B), a finding unchanged from the previous evaluation in 1989.