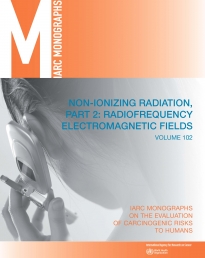 Read Introduction to the Monograph

This one-hundred-and-second volume of the IARC Monographs contains evaluations of the carcinogenic hazard to humans of radiofrequency electromagnetic fields. This is the second volume on non-ionizing radiation, after Volume 80 (Static and Extremely Low-Frequency (ELF) Electric and Magnetic Fields; IARC, 2002), and the fourth and last in a series on physical agents, after Volume 75 (Ionizing Radiation, Part 1: X- and Gamma-radiation, and Neutrons; IARC, 2000) and Volume 78 (Ionizing Radiation, Part 2: Some Internally Deposited Radionuclides; IARC, 2001). Solar radiation and ultraviolet radiation were evaluated in Volume 55 (IARC, 1992). The types of radiation evaluated as human carcinogens (Group 1) were revisited in Volume 100D (IARC, 2012). The topic of this Monograph is the evaluation of the carcinogenicity of radiation in the radiofrequency (RF) range (30 kHz to 300 GHz) of the electromagnetic spectrum. This type of radiation is emitted by devices used in wireless telecommunication, including mobile phones, and by many other sources in occupational and general environmental settings. Exposures are ubiquitous in more developed countries and rapidly increasing in the developing world, in particular with respect to the use of mobile phones. There is rising concern as to whether exposure to RF radiation emitted by a mobile phone affects human health and, specifically, whether mobile-phone use increases the risk of cancer of the brain. The general public, manufacturers, regulatory authorities and public health agencies are seeking evidence on the safety of mobile-phone use. Consequently, there has been intense interest in the development and outcome of this IARC Monograph. This interest reflects the high prevalence of exposure (which increasingly extends to children), the vast scope of the telecommunications industry, the findings of some epidemiological studies that suggest an increased risk of cancer, and a high level of media coverage of the topic of mobile phones and cancer. Although the preparation of this Monograph had been scheduled so as to include the results of the large international case-control study INTERPHONE on mobile-phone use (conducted in 2000-2004; published in 2010), it should be emphasized that the evaluations in this volume address the general question of whether RF radiation causes cancer in humans or in experimental animals: it does not specifically or exclusively consider mobile phones, but rather the type of radiation emitted by mobile phones and various other sources. Furthermore, this Monograph is focused on the potential for an increased risk of cancer among those exposed to RF radiation, but does not provide a quantitative assessment of any cancer risk, nor does it discuss or evaluate any other potential health effects of RF radiation.

Summary of Data Reported and Evaluation