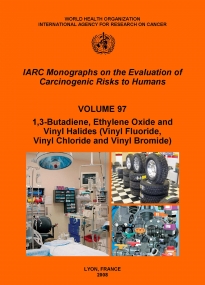 This ninety-seventh volume contains evaluations by a group of 25 scientists from eight countries of the carcinogenic hazard to humans of 1,3-butadiene, ethylene oxide and some vinyl halides (vinyl fluoride, vinyl chloride and vinyl bromide). These industrial gases or their epoxide metabolites are direct-acting mutagens that induce malignant tumours at many sites in rodents. The Working Group classified 1,3-butadiene as "carcinogenic to humans" (Group 1), on the basis of "sufficient evidence" in humans of an increased risk for leukaemias. Although the epidemiological evidence was "limited", the Working Group classified ethylene oxide as "carcinogenic to humans"(Group 1) taking into consideration that: ethylene oxide is an alkylating agent that directly reacts with DNA; it induces a dose-related increase in the amount of haemoglobin adducts in humans and rodents; it induces DNA adducts in rodents; it consistently acts as a mutagen and clastogen at all phylogenetic levels; it induces heritable translocations in the germ cells of rodents; and it induces a dose-related increase in the frequency of sister chromatid exchange, chromosomal aberrations, and micronucleus formation in lymphocytes of exposed workers. The two latter effects have been shown to be associated with an increased risk for human cancer. Together with the finding that vinyl chloride increases the risk for liver cirrhosis, a risk factor for hepatocellular carcinoma, other results provide "sufficient evidence" in humans that vinyl chloride causes angiosarcoma of the liver and hepatocellular carcinoma, leading to the overall classification of vinyl chloride as "carcinogenic to humans" (Group 1). Vinyl fluoride and vinyl bromide are gases used predominantly for the manufacture of their respective polymers. The Working Group took into consideration that all available studies showed a consistently parallel response between these chemicals and vinyl chloride, and classified vinyl fluoride and vinyl bromide separately as "probably carcinogenic to humans" (Group 2A). They stressed that for practical purposes, these chemicals should be considered to act similarly to the human carcinogen, vinyl chloride.