You are here: Home / Book and Report Series / IARC Monographs on the Identification of Carcinogenic Hazards to Humans / Some Non-heterocyclic Polycyclic Aromatic Hydrocarbons and Some Related Exposures 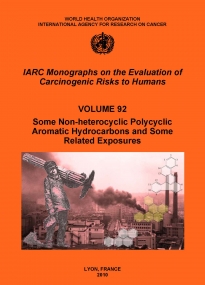 Some Non-heterocyclic Polycyclic Aromatic Hydrocarbons and Some Related Exposures

This volume reviews the potential carcinogenicity of 60 polycyclic aromatic hydrocarbons and several occupational exposures involving coal-derived polycyclic aromatic hydrocarbons. These are formed during the incomplete combustion of organic material. Environmental sources of polycyclic aromatic hydrocarbons include industrial air pollution, urban air pollution, tobacco smoke, and diet (which is commonly the main source of exposure in nonsmokers who are not exposed to such hydrocarbons through their occupations). High occupational exposure can arise during the conversion of coal to coke and coal tar, and during the processing and use of products derived from coal tar. In this volume, benzo[a]pyrene, other PAHs and related occupational exposures were evaluated by an IARC Monographs Working Group, reviewing epidemiological evidence, animal bioassays, and mechanistic and other relevant data to reach conclusions as to their carcinogenic hazard to humans.

Some Non-heterocyclic Polycyclic Aromatic Hydrocarbons and Some Related Exposures